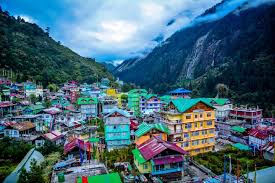 Sikkim is a state in northeastern India. It borders Tibet in the north and northeast, Bhutan in the east, Nepal in the west, and West Bengal in the south. Sikkim is also located close to India’s Siliguri Corridor near Bangladesh. Sikkim is the least populous and second smallest among the Indian states. A part of the Eastern Himalaya, Sikkim is notable for its biodiversity, including alpine and subtropical climates, as well as being a host to Kangchenjunga, the highest peak in India and third highest on Earth.Sikkim’s capital and largest city is Gangtok. Almost 35% of the state is covered by the Khangchendzonga National Park.
The Kingdom of Sikkim was founded by the Namgyal dynasty in the 17th century. It was ruled by a Buddhist priest-king known as the Chogyal. It became a princely state of British India in 1890. After 1947, Sikkim continued its protectorate status with the Republic of India. It enjoyed the highest literacy rate and per capita income among Himalayan states. In 1973, anti-royalist riots took place in front of the Chogyal’s palace. In 1975, the monarchy was deposed by the people. A referendum in 1975 led to Sikkim joining India as its 22nd state. 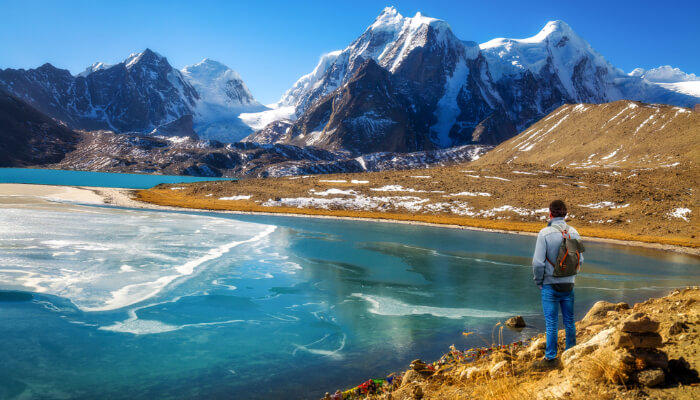 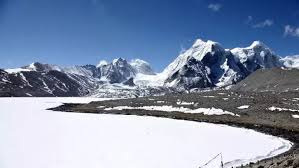 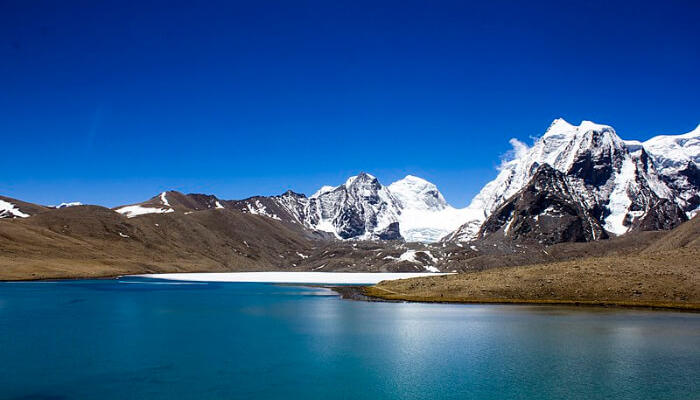 Gurudongmar Lake is one of the highest lakes in the world and in India, located at an altitude of 5,425 m (17,800 ft),[1] in the Indian state of Sikkim.[2] It is considered sacred by Buddhists, Sikhs and Hindus.[1] The lake is named after Guru Padmasambhava—also known as Guru Rinpoche—founder of Tibetan Buddhism, who visited in the 8th century.
The lake, fed by glaciers, is located to the north of the Kangchengyao range, in a high plateau area connected with the Tibetan Plateau. It provides one of the source streams which joins the Tso Lahmu and then form the source of the Teesta River. The lake remains completely frozen in the winter months, from November to Mid-May.
Gurudongmar, is inhabited by Yaks, blue sheep and other wildlife of high altitude 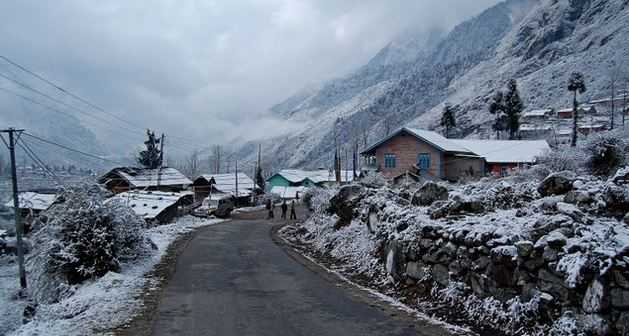 Lachen is a town in North Sikkim district in the Indian state of Sikkim. It is located at an elevation of 2,750 metres. The name Lachen means “big pass”. The town forms the base to the Chopta Valley and Gurudongmar Lake. An annual yak race, the Thangu is held here in summer.
Unlike other places in India, Lachen has its unique form of local self governance called the “Dzumsa”. Every household is a member of this traditional administrative system, this institution is in charge of governing and organizing activities within the village.
Lachen valley has almost everything a traveler could wish for: a land of fairs and festivals, snow-clad mountains, lakes, valley of flora, fauna and a vibrant local culture. Visits to the Lachen monastery and the women’s handicraft centre to view weaving of traditional blankets and carpets will provide insights into the local way of life or perhaps a stunning mountain drive can be taken along the Tibetan plateau to Gurudongmar and Cho Lhamu as a day tour from Lachen. The sacred Gurudongmar lake at a height of 17,100 ft encircled by snowy massifs is something one would not dare to miss on a visit to Sikkim. One can also stay over night at Thangu which is 30 km away from Lachen. During summer and monsoon the entire place is dotted with flowers of all kinds. 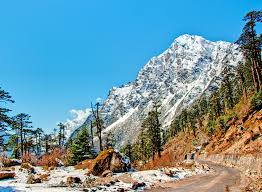 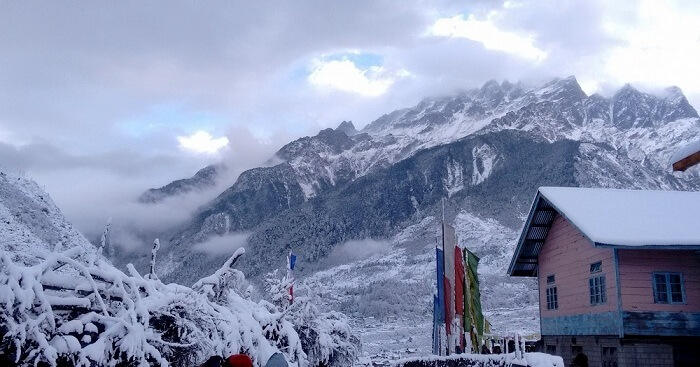 Lachung is a town and hill station in northeast Sikkim, India. It is located in the North Sikkim district near the border with Tibet.Lachung is at an elevation of about 9,600 feet (2,900 m) and at the confluence of the lachen and Lachung Rivers, both tributaries of the River Teesta. The word Lachung means “small pass”. The town is approximately 125 kilometres (78 mi) from the capital Gangtok.
Lachung has been described as the “most picturesque village of Sikkim” by British explorer Joseph Dalton Hooker in his definitive, The Himalayan Journal (1855). Skiing is conducted in Phuni near this town. 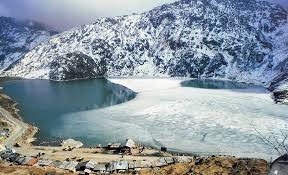 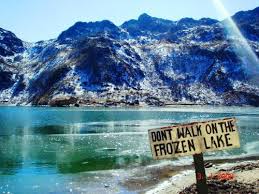 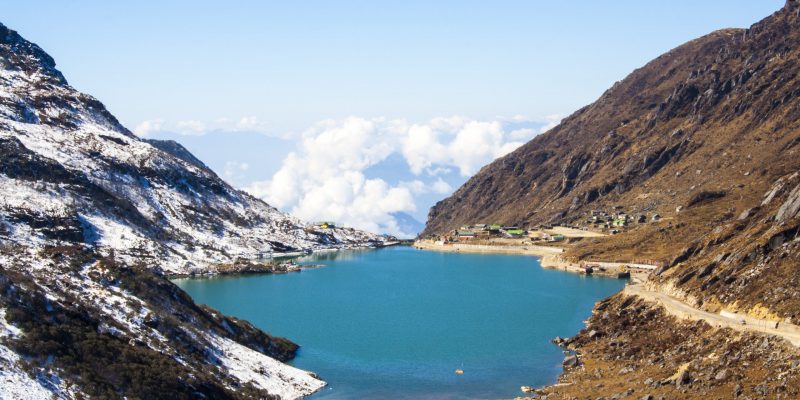 Tsomgo Lake, also known as Tsongmo Lake or Changu Lake, is a glacial lake in the East Sikkim district of the Indian state of Sikkim, some 40 kilometres (25 mi) from the capital Gangtok. Located at an elevation of 3,753 m (12,313 ft), the lake remains frozen during the winter season. The lake surface reflects different colours with change of seasons and is held in great reverence by the local Sikkimese people. Buddhist monks prognosticated after studying the changing colours of the lake.
The lake is surrounded by steep mountains which are covered with snow during winter. During summer the snow cover melts and forms the source for the lake.The lake which remains frozen in winter season, sometimes extending up to May. 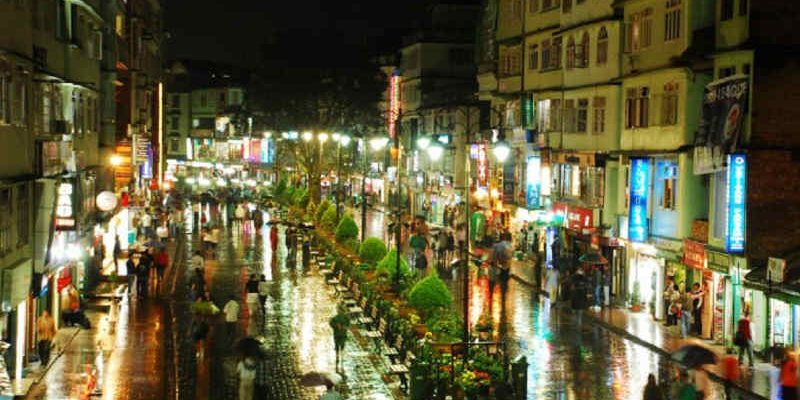 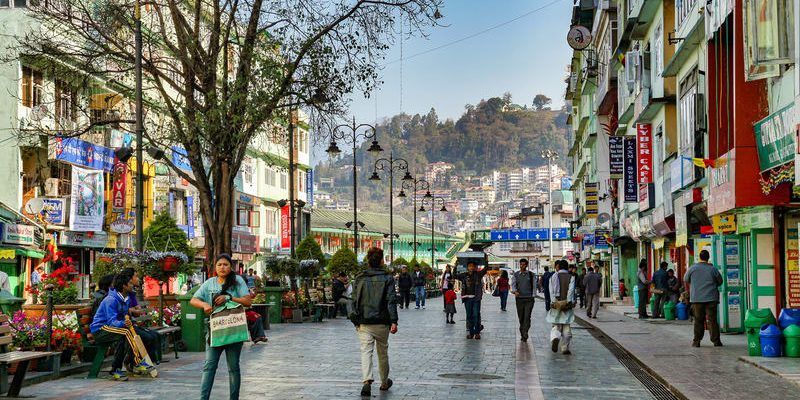 This place is a ‘must visit’ because without it a visit to Gangtok is really incomplete. ‘Marg’ in Hindi means ‘Road’. So MG Marg means MG Road … all Indians will know that always an important road (if not the most important road) in any city or township in India would be named as Mahatma Gandhi Road or MG Road. Gangtok is no exception and this is the town center of the hill town.
The road and the area around it has transformed over the years. It is now more like a long stretch of open mall or boulevard square where locals and tourists take leisure stroll or just sit and relax on one of the many benches laid along the middle and both sides of the road to soak in the ambience. 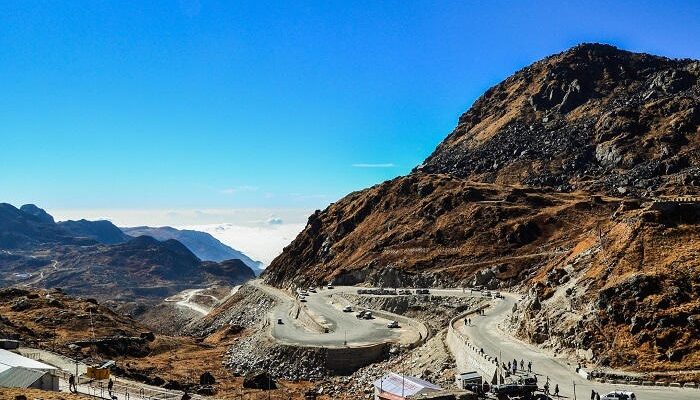 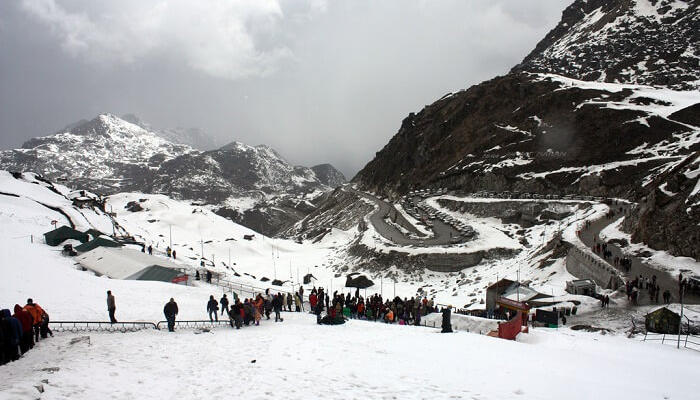 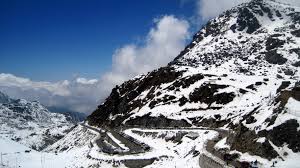 Nathu Lais a mountain pass in the Himalayas in East Sikkim district. It connects the Indian state of Sikkim with China’s Tibet Autonomous Region. The pass, at 4,310 m (14,140 ft) above mean sea level, forms a part of an offshoot of the ancient Silk Road. Nathu means “listening ears” and La means “pass” in Tibetan. On the Indian side, the pass is 54 km (34 mi) east of Gangtok, the capital of Sikkim. Only citizens of India can visit the pass, and then only after obtaining a permit in Gangtok.
Nathu La is one of the three open trading border posts between China and India; the others are Shipkila in Himachal Pradesh and Lipulekh (or Lipulech) at the trisection point of Uttarakhand–India, Nepal and China Sealed by India after the 1962 Sino-Indian War, Nathu La was re-opened in 2006 following numerous bilateral trade agreements. The opening of the pass shortens the travel distance to important Hindu and Buddhist pilgrimage sites in the region and was expected to bolster the economy of the region by playing a key role in the growing Sino-Indian trade. However, trade is limited to specific types of goods and to specific days of the week. 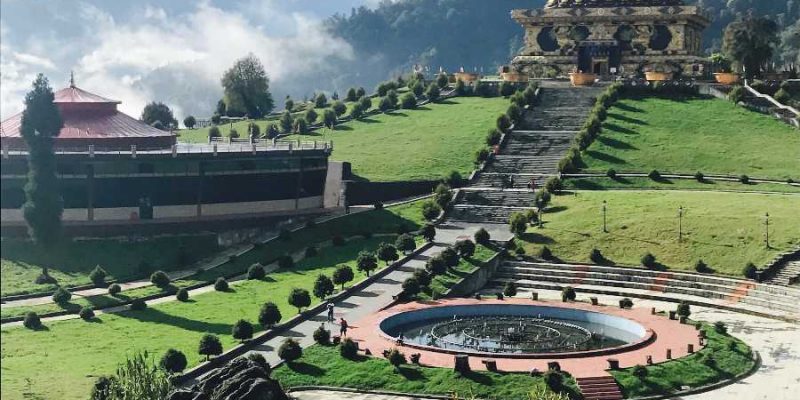 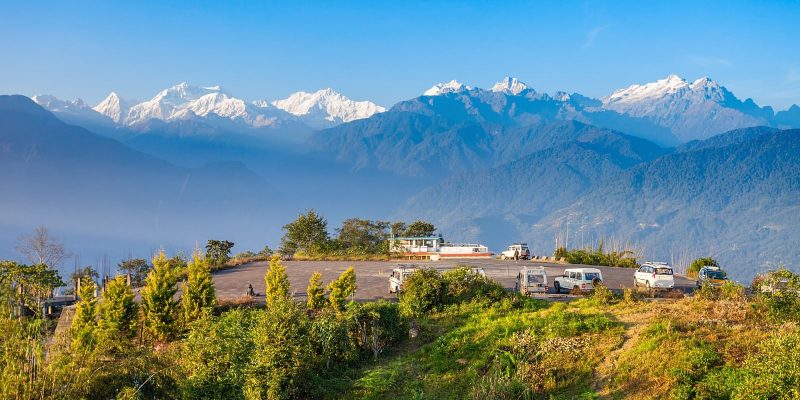 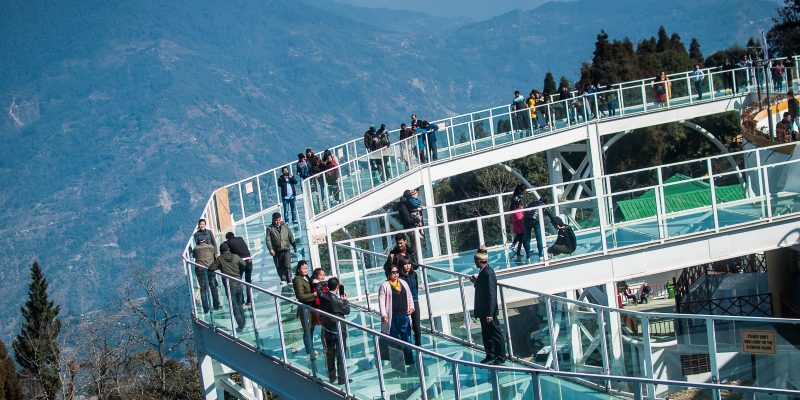 The Himalayas and the Kanchenjanga may be viewed at close quarters from Pelling. Pelling also forms the base from where trekkers and other peripatetic adventurers undertake the strenuous and arduous treks in West Sikkim. The land around Pelling is still a virgin territory and is bathed with alpine vegetation, with numerous waterfalls lining the hillside. In the months of winter, Pelling is sometimes covered with a blanket of snow. 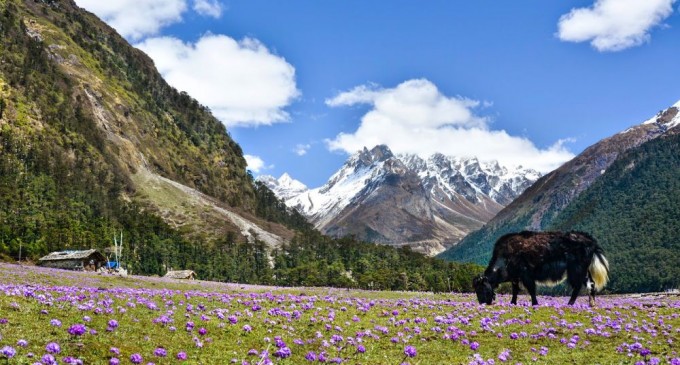 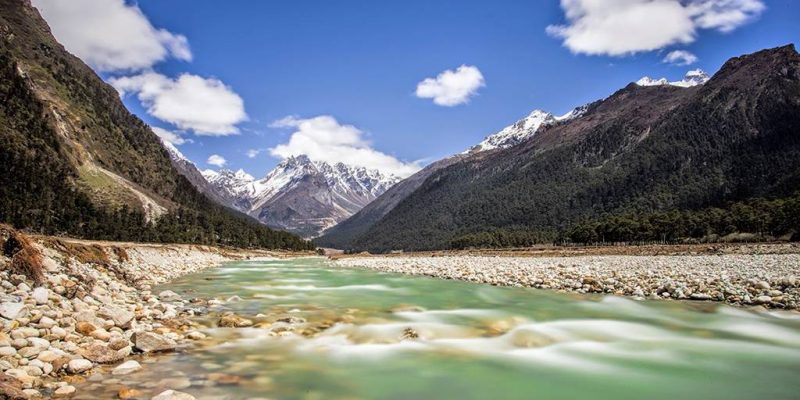 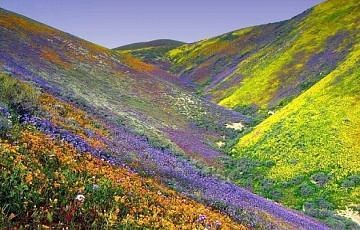 The Yumthang Valley or Sikkim Valley of Flowers sanctuary, is a nature sanctuary with river, hot springs, yaks and grazing pasture on rolling meadows surrounded by the Himalayan mountains in the North Sikkim district of Sikkim state in India. It is at an elevation of 3,564 metres (11,693 ft) above msl at a distance of 150 kilometres (93 mi) from the state capital Gangtok.It is popularly known as ‘Valley of Flowers’and is home to the Shingba Rhododendron Sanctuary, which has over twenty-four species of the rhododendron, the state flower. The flowering season is from late February and to mid June, when countless flowers bloom to carpet the valley in multicolored hues of rainbow.A tributary of the river Teesta flows past the valley and the town of Lachung, the nearest inhabited centre. Yumthang is closed between December and March due to heavy snowfall. There is also a hot spring in the valley.
A forest rest house is the only permanent residence in the valley. During the spring months, the area blooms with rhododendrons, primulas, poppies, iris and other flora. During the summer months, villagers take their cattle to these heights to graze (a practice known as yaylag pastoralism). In view of increasing number of tourists, there is possibility of environmental degradation in near future.Skiing is conducted in the valley. 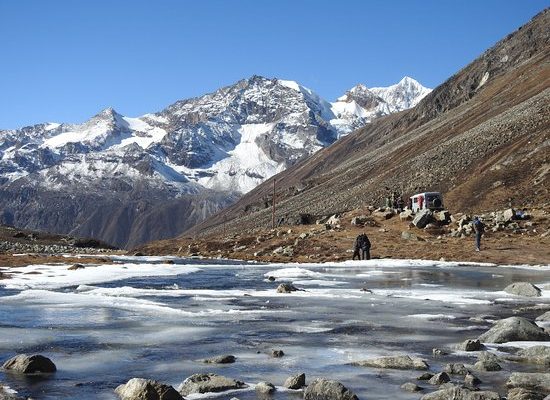 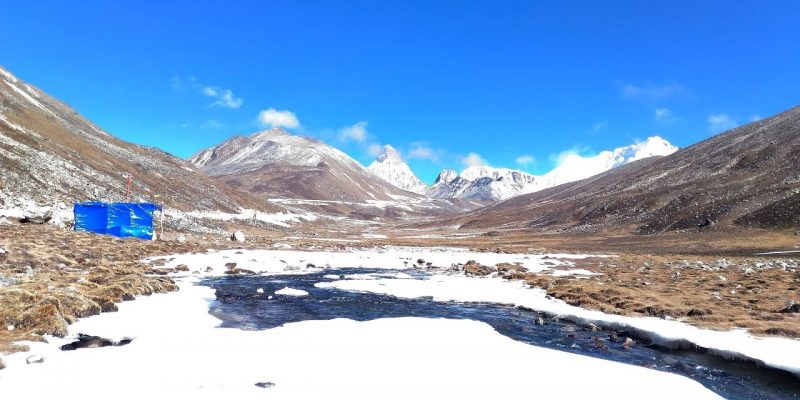 Zero Point Sikkim (Yumesamdong) is situated at the elevation of 15,300 ft.This place is often called “Zero Point” because there is no motorable road after this place and the visitors are not permitted to go beyond this point due to its proximity to the Chinese border.